"At" the devil, not "with" unconvincingly stated Nikki Sixx in several interviews. Mötley Crüe are not satanist people but "just a rock n' roll band (all right?!)". We are out to send "a positive message!". Sure, we believe him and also realize that he was a genius when it came to marketing and promoting his... END_OF_DOCUMENT_TOKEN_TO_BE_REPLACED

1987: hair metal is at its height and the most commercial and mainstream music charts the Billboard. Pop music dominates and yet, new styles are about to emerge mixing hard rock, rap, and funk which is exactly what this album does. For the Chili Peppers, commercial success is a long time coming as their first two albums failed to make a dent on the charts and constant change of personnel (not to mention heavy drug use) prevented them from finding stability and the right chemistry. However, with the return of founding member Jack Irons on the drum seat, the pieces of the puzzle came together and they finally got a proper chance at making their initial vision happen.

The loss of a frontman can surely put an end to a great band. Fortunately for us (and for them), after the death of the hilarious and beloved Bon Scott, AC/DC carried on to deliver one of the most powerful and well written album of their career. The classic "Hells Bells" opens the hostilities and... END_OF_DOCUMENT_TOKEN_TO_BE_REPLACED 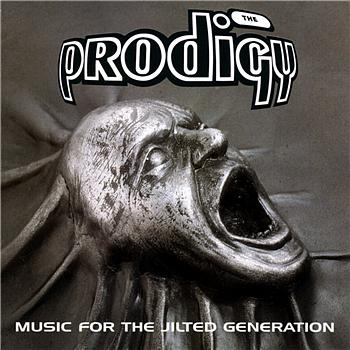 In this review The Prodigy destroys your ears with the masterful Music For the Jilted Generation (they know what they are talking about!). Excess, excess and more excess could be the motto of the little pearl who has been unfairly overshadowed by The Prodigy's next offering. Just watch the videos for "Poison" or "Voodoo People"... END_OF_DOCUMENT_TOKEN_TO_BE_REPLACED

A building in flames through the scope of a powerful weapon... A scene from the past or from the future? It is left to the imagination of the kid holding in his hand the third albums of Def Leppard. The message is clear though: get ready to get your ears washed by some mean 80's... END_OF_DOCUMENT_TOKEN_TO_BE_REPLACED