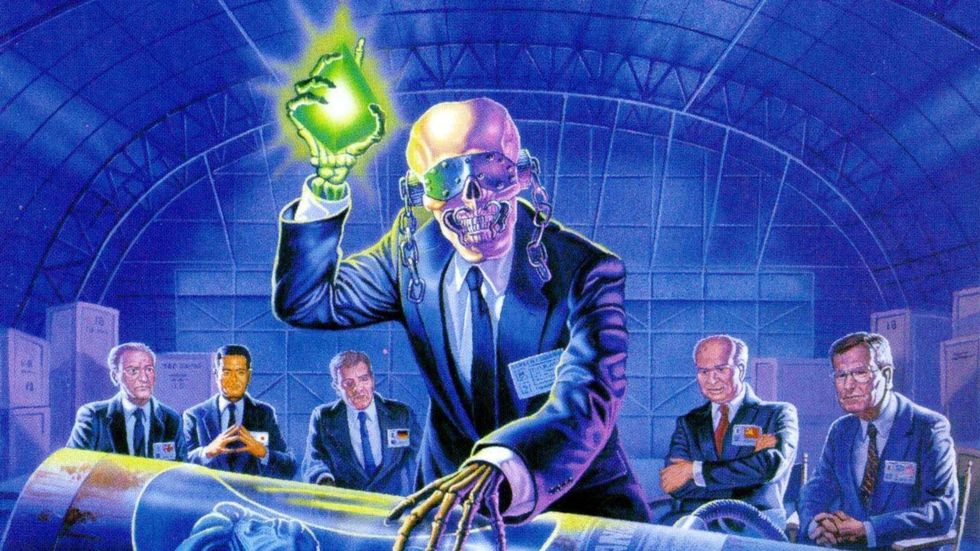 In a way, Rust in Peace was a fresh start for Megadeth. With the trash metal movement almost running out of stream and several bands moving to a more mainstream direction, 1990 was a bit of an in-between year, a transitional year even. A lot of albums that were released during that year were able to combine the violence of the trash with more of a heavy metal direction, going away from the insanely fast tempos of their beginnings and incorporating a more melodic approach.

A good example is Slayer’s Seasons In The Abyss. It combines elements of the furious Reign In Blood with the more slowed down tempo of South Of Heaven to give a balanced finished product that kept the original fan base happy, while drawing more metal amateurs not necessarily inclined to like trash. Rust In Peace is mainly trashy but displays here and there a few elements announcing what Countdown To Extinction will be 2 years later.

But let’s get back to our topic here. By 1990, Megadeth were trying to put behind them a productive yet tumultuous decade. With constant line-up changes, the band still managed to put out the absolute classic Peace Sells…But Who’s Buying and the enjoyable So Far, so Good…So What! but the rampant drug use of Mrs Mustaine and Ellefson were starting to take their toll. After cleaning their act (temporarily), the pair was able to get back on track to write and record an album that would be cited countless time as a reference by peers and fans alike.

Having now secured the services of drummer Nick Menza (who, interestingly enough, also auditioned for Slaughter(!) at the time) and guitar virtuoso Marty Friedman formerly of Cacophony, the band was now entering an era that is widely considered as its most commercially successful and possibly most inspired.

The masterful “Holy War” sets the tone. It was actually the song that introduced me to Megadeth and needless to say I was hooked from the start. 15 (or so) brilliant riffs in one song, machine gun style drums and groovy bass, you have here a definite trash classic. I remember being a little surprised hearing Mustaine’s voice for the first time but thinking that it actually works well with the avalanche of guitars, despite its limitations. The other classic (and single) of the album “Hangar 18” shows a new side of Megadeth and I mean by that that it sounds very much like what was in fashion at the time sonically speaking with a strong and bulky production (unlike the one in Peace Sells for example that is very thin). It also shows a shift in the lyrics focus going from the fear of nuclear war as one of their main topic to the possible existence of extra-terrestrial life.

Like most classic trash albums, Rust In Peace needs to be listened to in one sitting because every songs are important to the album as a whole. Some album, you only retain the obvious single or classic, but on this one, every songs hides something special like the opening bass line in “Five Magics” or the insanely impressive solo on “Tornado Of Souls”. Talking about solos, Marty Friedmann proves that he was the perfect addition to the Megadeth camp and his style completes Mustaine’s very well. While it could have been a competition, the two mens teamed-up to benefit from each others musical and technical skills and the result is just amazing.

My personal favorite on this one is the closing track, “Rust In Peace..Polaris” that kicks some serious ass thanks to an infectious riff provided by the redhead axeman. I also like very much the change of tone in his voice, alternating between dark, menacing, and a little softer. What a great way to close an album.

I don’t think I have read one bad review of Rust In Peace in my 16 years as a metalhead and it is justified. If you like the genre and you don’t have this one, it is an absolute sacrilege. Get off the couch, run to the store and get your own copy NOW! (I mean, you can also just get it on iTunes).

2 thoughts on “Launch The Polaris: Megadeth’s Rust In Peace”